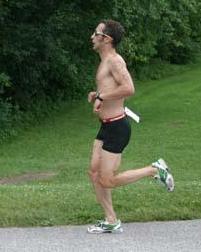 From what I can recall, it all started at TriJesus on June 12th of 2004. I had driven down the day before and after my customary carbo loading at Fazoli’s I had found a secluded parking lot to park the van in and get some sleep. I really wanted to defend my title from the previous year but the combination of summer heat and 1970’s fabric couch was keeping me awake.

After a fitful night’s sleep, I ended up taking second place by a scant 35 seconds. I’ll never know if the lack of sleep really affected me, but I was disappointed with the lack of comfort in the van. I really began to doubt if my logic of using it instead of renting a motel room was sound.

Following the race I talked with the third place finisher John Conners who had a Cervelo P3. He had ridden the fastest bike split beating me by a full mile per hour. As he talked about his bike, how stiff and responsive it was, I was intrigued. With the aerodynamic frame and rear wheel cutout, it did look downright fast. 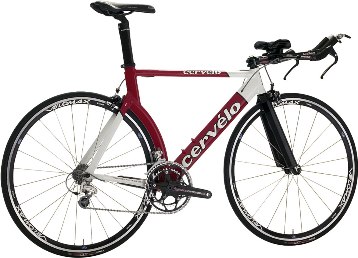 I’ll be the first to admit I’m an impulsive shopper. However, with the Cervelo P3 running about $3,500 (equipped with Dura-Ace), I didn’t have enough money to be that impulsive. I knew I wanted one, I just didn’t know how I was going to get one. Eventually I resigned myself to the next best thing, a professional fitting on my current bike.

After making some inquiries and doing some searching, I learned one of the best fitting sessions could be found at Maplewood Cyclery in St. Louis MO. It would be expensive, but I decided $250 was lots cheaper than a P3.

At some point during the fitting session, I told the guy that was fitting me about my classic VW van. He proceeded to tell me that a guy who was trying to buy Maplewood Cyclery collected VW vans. A light clicked on in my head…

Several months later, I was racing at the QuaterMax and HalfMax triathlons in Innsbrook MO. I had driven down in “the van” and was surprised to see a very similar van parked in the center of the expo area. Turns out it was Stewart Munson from Maplewood Cyclery. They were there selling merchandise and servicing bikes. The van was their lodging for the weekend.

After meeting Stewart, I presented him with my idea: We trade straight up, a new Cervelo P3 for my VW van. I figured as the future owner and current employee of a bike shop, he could get the P3 for cost. So he would be getting a deal, the van for less than 3k, yet I would be getting a deal as well. He seemed to agree…

After taking the van for a test ride, he said he just needed to run the idea by his wife. The Maplewood guys invited me to pull the van up next to theirs so I did and spent one last night in the van camped out at the race site expo. 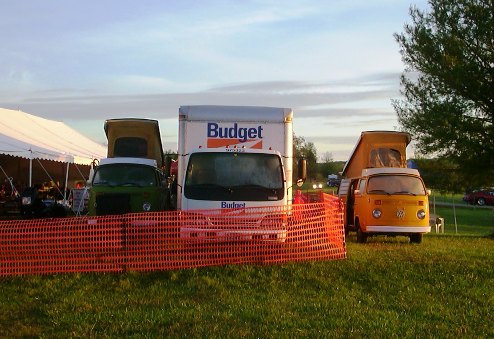 I slept well that night. The night was cool and I was worn out from the Quatermax triathlon I had completed that day. That last night in the van was what I had expected all along when I had bought it. But I hadn’t thought of the erratic Missouri weather that can bring sticky humid nights without consideration for a poor triathlete trying to get a good night sleep. But that final night was good and I woke refreshed and knocked 30 minutes off my ½ Iron distance PR.

A week later I was driving the van down to Maplewood Cyclery. I had signed up for the Rec Plex triathlon; this was my third year competing in this quality race that had started when I did, three years back. It was a strange sensation to be heading to St. Louis for a triathlon, yet leaving with no bike. I also wasn’t 100% certain how I would get back. So I traveled light just in case I needed to bike back, I could always split the trip with a motel stay along the way.

The trade went well and Stewart gave me a ride to the metro station where I caught a train to my parent’s house in Belleville. The following morning they took me to St Peters where I actually rode the bike for the first time that afternoon in a triathlon. I caught a ride home with some friends.

The Van sitting in front of my house

I still love that van. At times I question the wisdom of my decision. However, it was a classic vehicle that deserved to be pampered. I should also mention it didn’t fit in my garage. I remember driving up to my new house in it and pulling slowly up to the garage realizing it wasn’t going to fit, so it sat out on the street in the elements. It was also a gas hog getting around 18mpg on the highway. Finally, it was a distraction from my athletic pursuits. While I had planned on it being my “triathlonmobile”, it ended up being a time and money drain.

The other day I met my neighbor for the first time. She told me how excited her kids used to get when they saw me drive by in the van. It kind of made me sad… They probably wouldn’t get as excited if I got my P3 out with my tri spoke and disc wheel, threw on my aero helmet and some spandex, and then raced around the block a few times… Oh well, I like my P3, I’ll be faster on it this year that last, and in a few years from now I just might have to buy another van!

posted at 11:44:00 on 02/11/05 by Tony Rigdon – Category: General
While I’m still keeping my fingers crossed, I think I might have made it through the strep throat battle. I’ve managed to make both the Tuesday/Thursday 5:30am runs, even this morning when the temperature was a chilly 12 degrees. I’ve kept it short both times, around 5 miles and my legs have definitely felt the effects of my long layoff. Both mornings I’ve followed up the run with a brief (1,000 and 1,500 yd) swim. I can’t say there are no lingering effects of the strep, my throat still feels sore occasionally, but my immune system seems to be holding up and preventing another bout of fever and chills.

I’m looking at updating the site, changing things around a little; we’ll see how that progresses over the next few weeks…