As 2004 came to an end, I approached 2005 with high expectations and motivation. My main focus during the first few months of 05 was building a strong aerobic base with high mileage running. It was going to be my first “stable, uninterrupted” triathlon season. In 2004 I had been plagued by Achilles tendonitis, I had graduated from college, purchased a house, and had switched my position on the bike radically by acquiring a Cervelo P3. Sure I had done decently in 2004, had even won the inaugural Ultramax Championship Series, but I knew my training and circumstances had prevented me from living up to my full potential. Turns out 2005 would be more of the same.I didn’t think anything could prevent me from defending my Ultramax Series Championship and I certainly wouldn’t have guessed that I wouldn’t enter a single Ultramax event on 05. But then, I never would have guessed that I would quit my job, sell my house, and move to Columbia. 2005 would have me doing all three as I accepted a job as the logistics director for Ultramax Events (as well as maintenance director for Missouri Lions Eye Research Foundation).

Along with the move came new living quarters, no longer was I a home owner but I was now sharing a house with several individuals. The home owner, Natalie Suttmoeller pictured here with her husband Kevin, 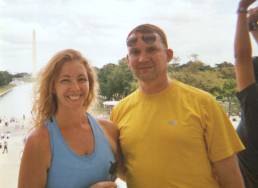 is a Kirksville resident who I was put in touch with through my triathlete friends, Rodney and Dianna Adkison. In addition to Natalie who is a nurse, I’m also sharing the house with Dr. Duc Nguyen, a cardiologist and all around good guy. It is comforting to know I’m surrounded by medical personal, especially following a difficult workout… This aspect of the move has been great and I have enjoyed my new digs and fellow residents, though Natalie keeps telling me she can cook and I have yet to see any evidence…

So once again my season was unstable and interrupted, though I was able to take advantage of increased training opportunities. It wasn’t the breakthrough season I was hoping for, but I was still able to compete in 26 different events.

One of the highlights of the season was the annual CMC trip to club nationals. This year it was in Houston TX. While we didn’t bring back a championship, we had a great time and it was a highlight of the season since I met my girlfriend, Nikki Reed on the trip. Funny I would have to drive all the way to Houston to meet her…

So 2006 is here now. Who knows if I’ll get my “stable, uninterrupted” season? Maybe this is how it will always be? 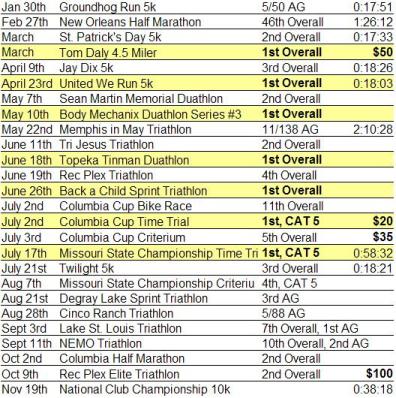 Tony, I think you omitted your most outstanding race of the year, September 18 in Sedalia? Surely this was not intentional?Hope you can make it to our races this year.
02/10/06 08:40:43

Hey Jeff… Oops, I did miss that one… That was one of my favorite races, I think that was my second year in a row doing it… Hoping to make it back this year, don’t have too many races where I get to defend a title!
02/23/06 20:58:38
I meant well, I was going to update this more frequently, honest! However, not everything is in my control, part of the absence has been my fault. My girlfriend, Nikki Reed and I did take some time off to go backpacking. That’s the one of the goals of backpacking, get away from technology; goal accomplished results in no updates…

Then there are the things out of my control, the things I can’t fully explain. One day everything was fine, beautiful 50 degree weather in January with an enjoyable 50 mile ride. The following day I thought a run would be in order. But as the day went on I felt less and less like running and by the end of the day I was in bed with a fever and chills. Turns out I had contracted strep throat.

On the positive side, I did finally finish the book I was reading, “Lance Armstrong’s War”. Great book, definitely gained insight into Lance and the workings of the Postal/Discovery Team. I found a couple of sections I just had to share. The first is about how concerned cyclists are regarding body weight. 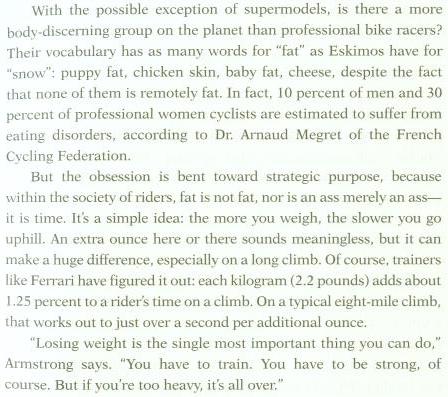 The second section, much later in the book, discusses the effect of “going out on the razor’s edge” which is basically getting the minimum weight possible combined with the best level of fitness possible and still remaining semi healthy. 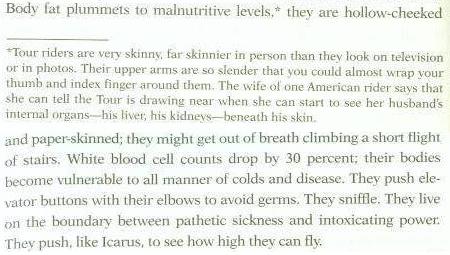 Fortunately triathlons require you to swim and run, not just bike, the razor’s edge isn’t quite as sharp…