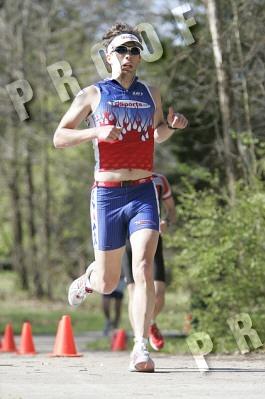 …minus the EPO tainted blood bags of course! For anyone unfamiliar with Jan Ulrich, he famously finished second in the Tour de France a total of five times (wikipedia). I’ve had similar luck in the MaxTrax Duathlon (formerly known as Wild Wings Duathlon), finishing second twice and third once. In addition, I’ve already finished second overall in two different 5ks and 3rd in another this year. On Saturday I lined up at the start of the Short Course to try one last time to win it before moving up to the long course. The last time I had raced it was in 2004 and I narrowly lost to Patrick Riley by 30 seconds. He went on to win it the next two years, however this year he didn’t show up.

The start of the race is a dash across a sloping grassy stretch, maybe 75 yards, until a fairly narrow pathway is reached. This is always the fastest part of the run as the competitors try and get to the front before being funneled into the narrow pathway. I was with the front few reaching the pathway and once the pace settled down there was only one other competitor who was ahead of me and he was setting a brisk pace. I didn’t recognize him, but I was guessing it was Brian Schoenholz whom I had seen on the entry list. I knew he could run, but based on last years bike splits I didn’t expect I would have any problem putting some time into him on the bike, he had averaged 18mph the previous year. I stayed with him initially and then he slowly pulled away. As we finished the first run, he had about a 15 second lead on me. I was quickly out on the bike, and he was still in sight so I hadn’t lost any time in T1. 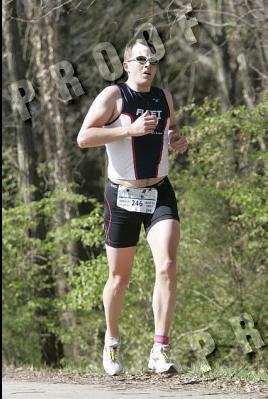 For the next 7.6 miles I attempted to pull him back but couldn’t seem to make any progress. It was really windy and I didn’t feel like I had any zipp in my legs. I hadn’t tapered at all for this race and it is possible the 40+ miles of running I had put in throughout the week was affecting me. As I pulled into T2, Brian had increased his lead to 35 seconds. Knowing this I hammered T2 and made it out in 28 seconds cutting his lead by 13 seconds down to 22 seconds. Unfortunately 1.5 miles wasn’t enough space to make up the remaining time and I ended up in second place by 12 seconds.

I was disappointed to have finished second for a third time, but at least it was close. It is still early in the season and the extra running I’m putting in now will pay back big dividends later in the year. Fifty-five miles of running last week, sixty this week, and then next week I’ll cut back some to prepare for Race for Sight.

posted at 12:58:35 on 04/26/07 by Tony Rigdon – Category: General
This past Saturday was my third 5k of the season. The previous two had both been run in sketchy weather, for the first it was nine degrees with a negative wind chill and the second it was snowing. So it shouldn’t have been a surprise when the forecast was calling for possible snow.

Race morning and it wasn’t quite cold enough to snow, so instead we were welcomed with rain. Personally I would take light snow over cold rain, but once the gun went off even the rain didn’t seem too bad.

The start was for both the 5k and 10k runners. Most of the top runners that I knew of were entered into the 10k, however I had spotted Christian Reed with a 5k number so I knew at best I could get 2nd place, he’s in a different league when it comes to running. Initially I led for the first 200 meters or so, and then Christian Reed went off the front. Knowing it was pointless to try and match his pace, I settled into my own rhythm. Derek Eisenbrei pulled even with me and we ran together briefly and then started to pull ahead. He was doing the 10k so I held back. Andy Emerson who was also doing the 5k passed me around the same time so I picked up my pace to keep him close. Several other 10k runners passed me but for the most part they all remained close, while Christian Reed was well ahead of us all.

At the 5k turn around the 10k runners continued on while I followed Andy back towards the rest of the oncoming runners. The next half mile or so was a little dicey as we had to weave amongst the oncoming runners, many of whom seemed unaware of the surroundings.

After we crossed back under Stadium, we crested a small incline and I decided to forge on ahead of Andy, we had about a mile left and I felt I could pick up the pace some. One of these days I’m going to stop playing the tactical game I play where I wait and pace off someone before I push myself into the “red zone”. Anyways, I moved into second position and ended with a strong final mile, finishing with a time of 18:30. Not quite as fast as I wanted to run, but progression in the right direction. 6:14 pace in February, 6:05 pace in March, 5:58 pace in April…

Great race! I feel honored you pacing off me. My first mile was the fastest ever for a 5K so no way I could keep it up.
06/06/07 22:55:15
I’m sitting here at the Laundromat fighting to stay awake as I wait for my clothes to dry. Not only am I sleepy tired, I’m just plain worn out as well. I started the day out at 8am running for 2 hours at Rockbridge state park. Most of this run was “aerobic paced” which basically means I could comfortably hold a conversation while running at this pace. Since I was running with Andy Pele and Jeff Wells we did just that for most of the run. It was only in the last mile and a half that I intentionally went hard and ran at about 6 minute pace for the last section. At the end of our run we had covered 11 wet and muddy miles.

After returning home I had just enough time to grab a bite to eat, perform some last minute adjustments on my bike, and then head out the door for a 43 mile bike ride. The majority of this ride was also spent at “aerobic” pace with only a few segments of tougher efforts mixed in. I also threw in a few dismount and running mount practices into the mix at several different stop signs.

Finally, immediately upon returning home I headed out the door for a quick 1.25 mile run as fast as I could muster at this point. That turned out to be 7 minute mile pace. All in all a tough day of training for this early in the season, but one that will hopefully pay back dividends in the near future.

posted at 18:55:00 on 04/15/07 by Tony Rigdon – Category: Training
This happened about a month ago, but better late than never… I headed up to Kirksville Friday evening, visited with some friends and spent the night and Walt’s & Dawn’s house. It was good to see some friends, though unfortunately you can’t see them all with such little time to work with… The next morning I was shocked to find 2+ inches of snow on the ground with huge snow flakes continuing to fall. Despite the snow, around 100 of us lined up for the 9 am start. The winner from the previous year wasn’t there and neither were Matt Lucas or Todd Beaverson. John Richardson who I had narrowly edged out the year before was there but nobody else that I recognized that might take the 1st overall position.

The course was slightly modified and was a little shorter this year so the times would be faster. One person who was of unknown quantity but possibly a contender was Sean Masa, I recognized the name but I wasn’t sure from what race and how fast he was.

The gun sounded and we were off. The initial pace was comfortable and I considered pushing it a little, but I also knew in about a mile the current pace wouldn’t feel so good anymore. Sean was leading and I was content to follow for the time being. After about half a mile, Sean began to pick up the pace and nobody else with us could follow. I briefly tried to match the pace and pulled into second place by myself, but I could tell I wouldn’t be able to maintain the pace so I backed off slightly.

A mile into the race, Thomas Etter pulled even with me. Thomas is a really good biker and competes in adventure races with James Kaufman. Since he had pulled me back I decided to let him take the lead so I could hopefully maintain a slight advantage on him when it came to the finish. I settled into a comfortable pace behind Thomas and would have stayed there until a half mile to go or so, but around two miles he said something about being new at 5k’s and I ought to be setting the pace, so I took over the pace setting and back into second place.

About a block later we came to a street that the race normally went right on and I started to turn right. A police officer and a volunteer were standing there and neither of them said anything initially until I had fully completed the turn at which point they hollered after me and said I was supposed to go straight! So I turned around and had to hustle to make up the five or so yards I had fallen behind Thomas. At this point we were down to about three quarters of a mile and I began to pick up the pace. Thomas stayed close until the very end when I pulled away finishing four seconds ahead of him. My final time was 17:40; however the course was short so I wasn’t as happy about my time as I would have been on a proper 5k course.

All in all another fun St. Patrick’s Day 5k. It was nice having Thomas push me and also for the company, running in second place by yourself is lonely. Though if he keeps racing 5k’s I might be finishing second to him!

posted at 07:30:00 on 04/12/07 by Tony Rigdon – Category: Race Reports
Since we’ve had some nicer weather for a few weeks now I’ve been getting out more on the bike. The miles on the bike this year are slowly creeping up and will probably overtake my running miles in the next few days or so. After today’s long ride my bike miles are only 7 miles short of my run miles for the year. It’s an inevitable catch, but I plan on running a lot more this year than in the past so hopefully I’ll keep those run mile totals up there.

In what little spare time that I have, I’ve tried to work some on my training log. Some of the recent work I’ve done has been to display the most recent workout I’ve logged on the left side of the front page in red. It also displays a “running” total and I’m working on having all my workouts available online both for me to easily reference and in case anyone else would like to see what my training is like. A preliminary design is up at: http://www.triathleteguru.com/training_log.php.